Mikro-Cath Pressure Catheters use Millar's proven high-fidelity pressure sensor technology to record precise measurements within the airway to advance discovery in respiratory physiology. Signals are unaffected by patient position or movement during respiratory cycles of breathing events such as obstructive sleep apnea.

With the Mikro-Cath, clinicians can obtain more comprehensive and accurate measurements for:

Obstructive Sleep Apnea (OSA) is a chronic condition characterized by recurrent episodes of partial to complete pharyngeal collapse which induces apnea and hypopnea during sleep. Initially, the consequences of OSA included sleepiness and daytime fatigue. Upon further investigation more critical outcomes, such as cardiovascular disease, stroke, and decreased life expectancy1,2 were linked to OSA. While this condition is underdiagnosed in adults, studies have shown a 2-7% prevalence in the population, with risk factors including obesity, age, the male sex, family history, as well as ethnicity3.

Even though OSA was characterized in the 1970s5, there is still no reliable model to predict successful treatments for patients6. Current treatment options for OSA include continuous positive airway pressure (CPAP), oral appliances, and surgery. Determining the best treatment option for patients is a challenge for both researchers and clinicians due to anatomical factors that predispose the patient to pharyngeal collapse, combined with their neuromuscular response1,6. While recent studies have shown an improvement in treatment efficacy using anatomical phenotype models based on airway site collapse7,8 more research is necessary to define these biomechanical models.

In order to study the biomechanics of pharyngeal collapse, precise airway pressure measurements are needed. The Millar Mikro-Cath diagnostic pressure catheter provides true pressure readings and the ability to detect the slightest changes in pressure. The Mikro-Cath is FDA approved to record measurement within the patient for up to 24 hours, and with a sensor that is only 3.5F (1.17 mm), the Mikro-Cath creates less discomfort or disturbance for the patient while the catheter is introduced and recording the upper respiratory tract. 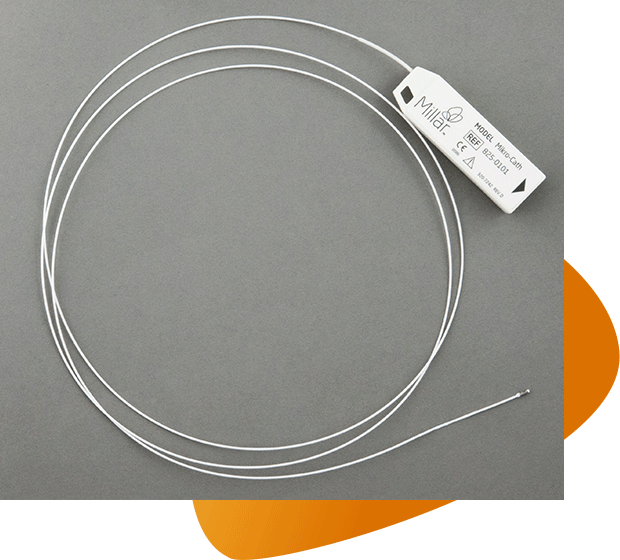 Millar has been collaborating with clinicians around the world for years to provide the breakthrough technology that advances medical innovation. Contact us today to see how we can help you make a difference. We welcome your questions and ideas. US Headquarters T: +1 832.667.7000. Toll Free: 800.669.2343 (US Only)